4 Schedule 1 breeders also recorded during the day not listed above.
Posted by Mark Hipkin at 14:43 No comments:

On my way back from the beach following a bit of wader watching I found a nice area in the dunes which was pretty well sheltered from the strongly winds. It was full of butterflies and I managed to record some good stuff for this site. At least 20 Brown Argus were on the wing here and it was great to see them fly in the company of Common Blue butterflies. They are quite distinctive in flight, the underwing looks quite pale (sometimes described as silvery) and they keep quite close to the ground and fly a bit faster than Common Blue.

At least 5 Dingy Skippers were flying around the sheltered area and is a good record for this site, although sightings of this species are being recorded pretty regularly this year

Only 2 Small Blue were found today
At least 20 Small Copper were here and further afield as were the most abundant species today Common Blue which numbered over 60 throughout the site.
Posted by Mark Hipkin at 20:19 No comments: 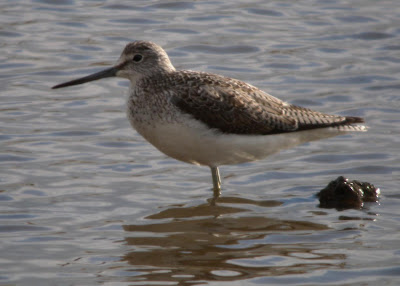 I made my first ever visit to Penclacwydd WWT today! I've walked the millennium path a few times but, never actually entered the reserve. Having now experienced it I can't wait to go back. I spent my whole time in the British Steel hide and although there were never very large numbers of birds, there was a continual movement of birds to and from the scrape.

5 Greenshank (shown above) were showing on and off throughout the day. Other nice stuff were a fine drake Pintail, 3 Little Egret, 2 Black-tailed Godwit and 1 Great Spotted Woodpecker over the centre.
Posted by Mark Hipkin at 18:50 2 comments: 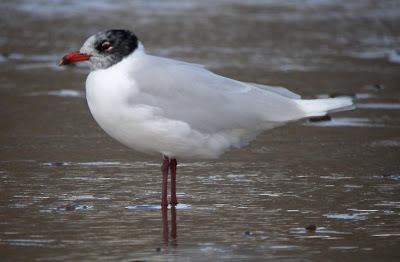 This fine adult Mediterranean Gull was on Aberavon Beach on Saturday. Although good numbers are often found around Bracelet Bay they are much more uncommon at these nearby beaches. It was very confiding and completely on its own in the middle of the beach. A Black-headed Gull joined it briefly but, was unable to put up with the activity on the beach that this Gull could.

I found it during a volunteer survey to look for birds that have been washed up along our beaches. This survey is conducted nationwide with particular interest in oiled birds or signs or oil. The stretch I covered was between the Neath river and Afan river. It is pleasing to report that no signs of oil was present. Even more pleasing, were the very good numbers of Sanderling present along this same stretch. I counted 529 Sanderling here, with 375 on the main beach and a further 154 in the smaller bay at the mouth of the Afan.
Posted by Mark Hipkin at 18:48 No comments: 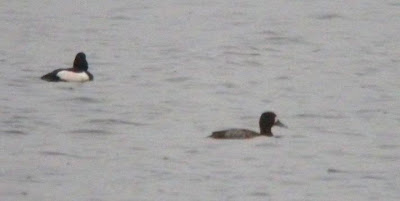 In very depressing conditions at eglwys today, the quality of species present brightened things up a good deal. Duck numbers fluctuate quite a lot at Eglwys from day to day. The female Lesser Scaup was definitely present last week on the 16th and 17th but, I'm not sure if it was seen there after those dates, even though it was looked for. Today she was showing quite well, albeit distantly, and feeding frantically.

The slavonian Grebe was still present, as were 2 drake Scaup. All these birds were viewed from the locked gate near reedy bay.
Posted by Mark Hipkin at 18:26 No comments:

Slavonian Grebe at Eglwys Nunydd Reservior today.It showed well down to about 30m in the NW corner of the res.
Posted by Mark Hipkin at 22:42 No comments: 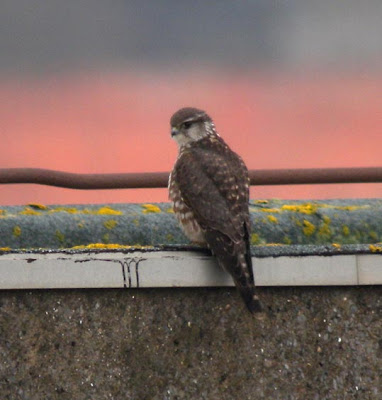 This gorgeous female Merlin allowed me some fantastic views this afternoon. She was hunting the old BP Baglan grounds and when I found her she was using this brick building to check out the local passerines. 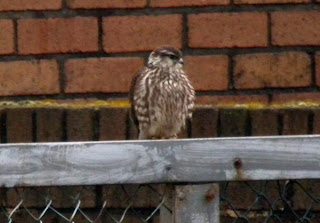 As the video below shows, the Carrion Crows wouldn't let her settle for too long but, they didn't chase her for long probably aware that she is far too quick for them in any case.